The Internet is constantly changing and it's not possible that anything will just stay as is and survive. This applies very much to Google, therefore they are doing everything to stay on top of their technological advancement and competitive edge. Let's dive into why the algorithm change, what were the most important algorithm changes in the history of Google and what they have impacted!

If Google stayed the same, we would not experience the quality of results we can enjoy now. While, over time, Google itself would be pushed away by its competitors.

It has to change in order to maintain user satisfaction, competitiveness and the market share.

Since the algorithm is a mathematical formula, each change to it needs to be carefully prepared and rolled out, otherwise, there’s a risk of a potentially huge impact on websites across the board.

How Often Does Google Update Its Algorithms?

Google has a great process to roll-out the updates. It’s first performing closed, virtual experiments, then off-line experiments, later online experiments on a portion of search traffic and finally the roll-out and post-change adjustments.

This process takes time and according to their own data for 2019, they ran over 464,000 experiments!

In 2019, we ran over 464,065 experiments, with trained external Search Raters and live tests, resulting in more than 3,620 improvements to Search.
Google

This might seem a lot and it is. If we just divide the number of days in a year by the number of algorithm changes (launches), it results in 9.92 changes per day.

In 2019, Google was changing its algorithm approximately 9.92 times a day!

Here’s what Google’s one and only John Mueller says about the algo update frequency:

What Are Google Algorithm Updates Looking At?

A lot of different things ranging from content, through links, to mentioned entities and semantic relevance between the pages.

It’s probably best to run through the main Google Updates released over the years and discuss what were the factors that each one of them was targeting. This is going to reveal the whole process of how Google first started targeting individual factors, to evolve into an adaptive algorithm able to change rankings on its own, at the query-level, through learning from the available data.

Let’s have a look at the most important algorithm updates in the history of Google! 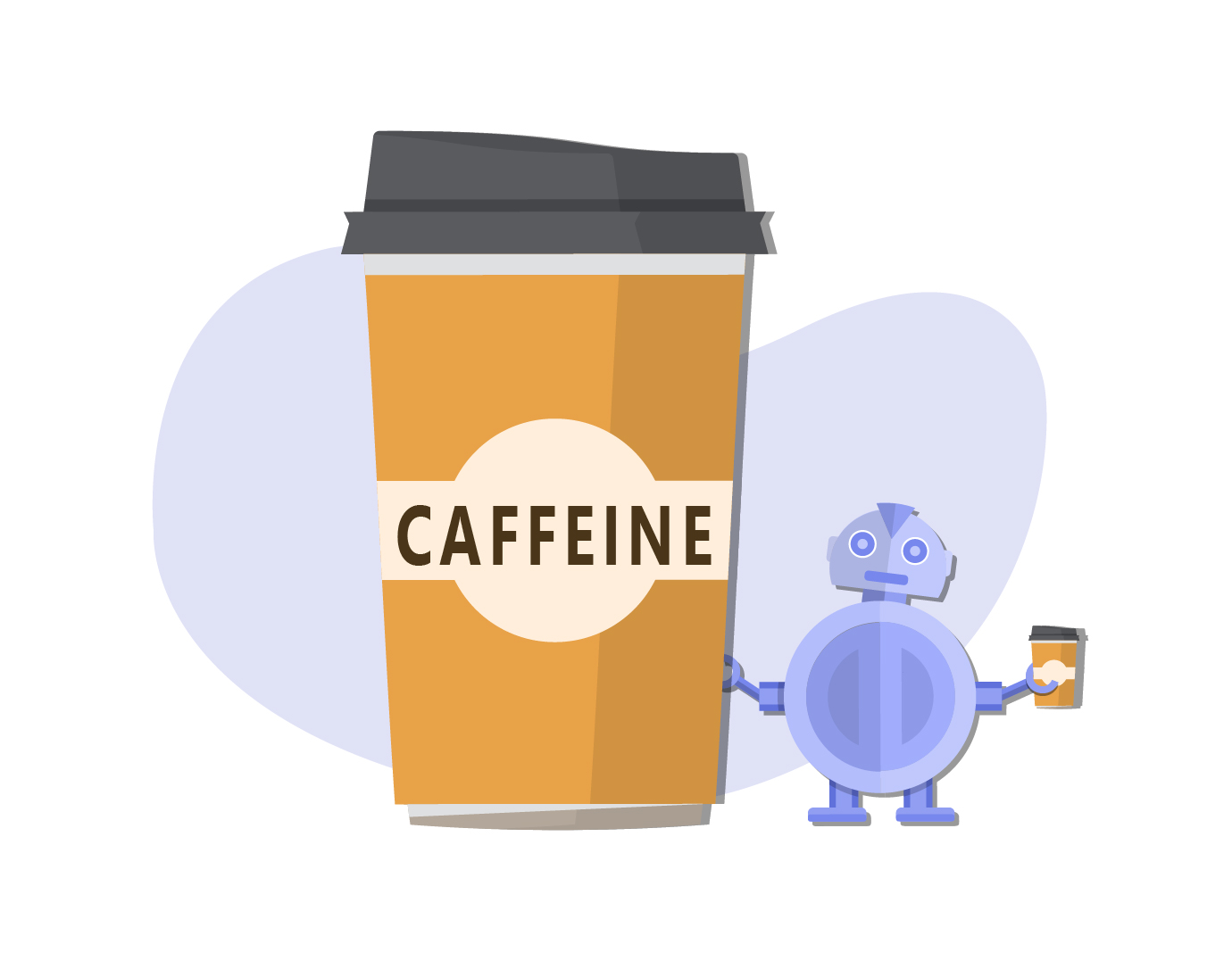 We’re starting here as this is probably the most important update in the search engine’s history.

On August 10, 2009, Google announced Caffeine – the completely new web indexing infrastructure and system, that allowed Google to deliver much faster and much fresher results (according to their very own estimates, it delivered around 50% fresher information). It also enabled Google crawlers to crawl and index many more pages and streamline them to the index in almost real-time. 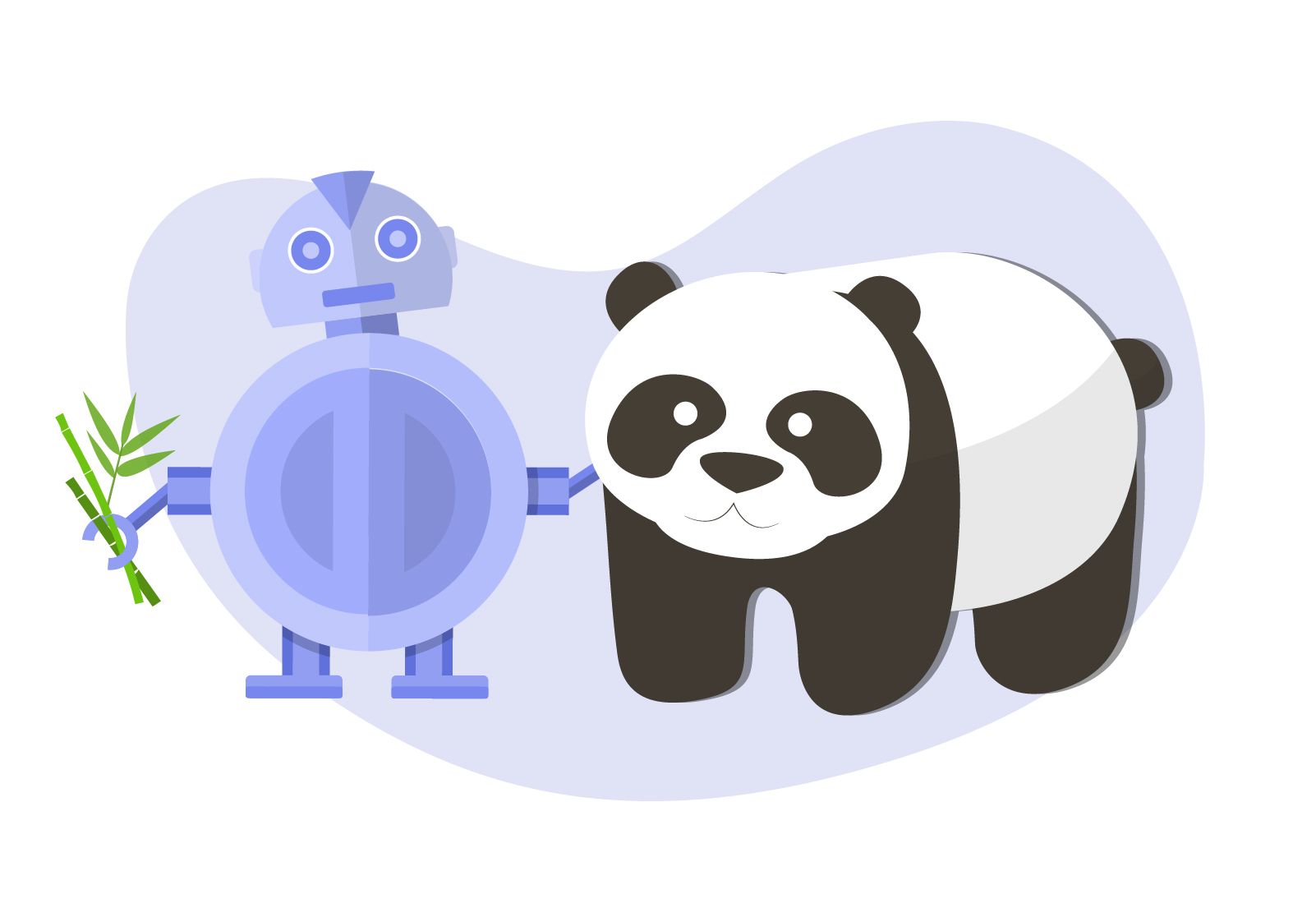 First released in February 2011, this was probably the second biggest algorithm change that Google designed and rolled out. There was no SEO and almost no website that did not get affected by Panda.

Panda, at first, targeted mainly low-quality sites like link farms, automatically generated content pages and thin-content sites. On the other side, the websites which invested heavily in content would usually go up in rankings.

There were several iterations of Google Panda update, all rolled-out between 2011 and 2015. The impact of these changes was so huge, that Google created several blog posts aimed at helping webmasters and SEOs to fall into “Google mindset” about content quality:

As the algorithm evolved, the main triggers for Panda devaluations included:

In our opinion, this set of updates really changed the approach that SEOs took with the content.

Eventually, in late 2015 or early 2016, Panda became a part of the core of Google algorithm and is still one of the most important sets of content quality signals. 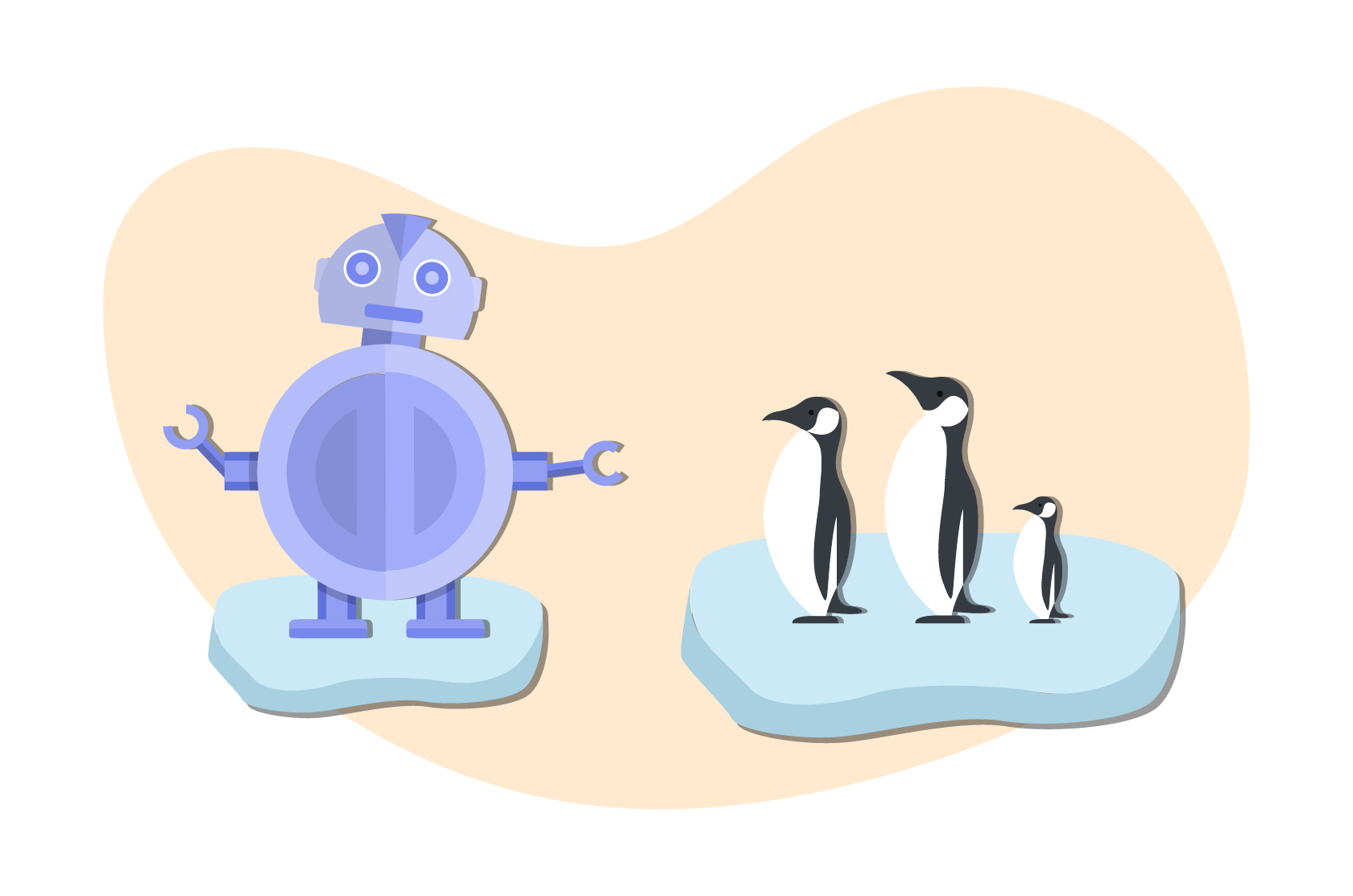 Penguin, together with Panda, were the two most hated updates that Google did to their algorithm.

There were also many documented iterations of Penguin, all rolled out between 2012 and 2016.

As this algorithm change evolved, it mainly focused on the following issues in the link profiles:

Page-by-page meant that if one (or several) pages on a site would get suspicious and unnatural links, it would only affect those individual pages, in opposite to the domain as a whole.

Site-wide meant that if several pages on a site (especially including the homepage) would get the majority of all the links in the link profile, Penguin could affect the entire domain. This was definitely true prior to Penguin 4.0, but we still occasionally discover cases where it seems probable that it might be true.

Similarly to Panda, Penguin became a part of the core algorithm. According to Google’s official announcement, it happened in September 2016. 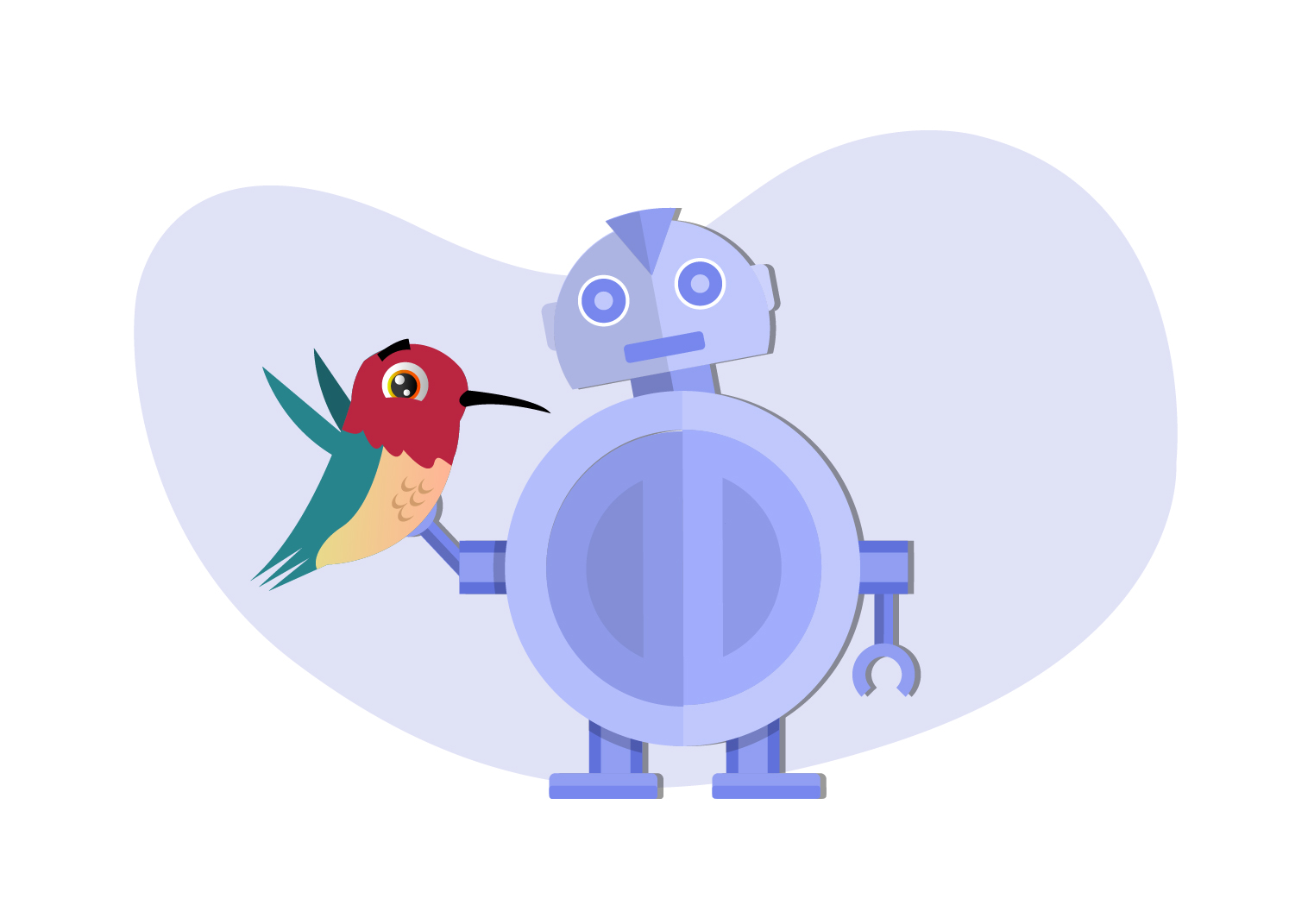 Google announced this update on September 26, 2013, however, Google has been working on it for months and most likely did the initial rollout a bit earlier.

Hummingbird was extremely important. According to some comments made by Google employees, this change was much bigger than Caffeine and the biggest since 2011.

Hummingbird was the new era of search, where the algorithm no longer looked only at individual words in the query, but was also trying to understand the context of it and allowed for conversational search, especially in voice search. 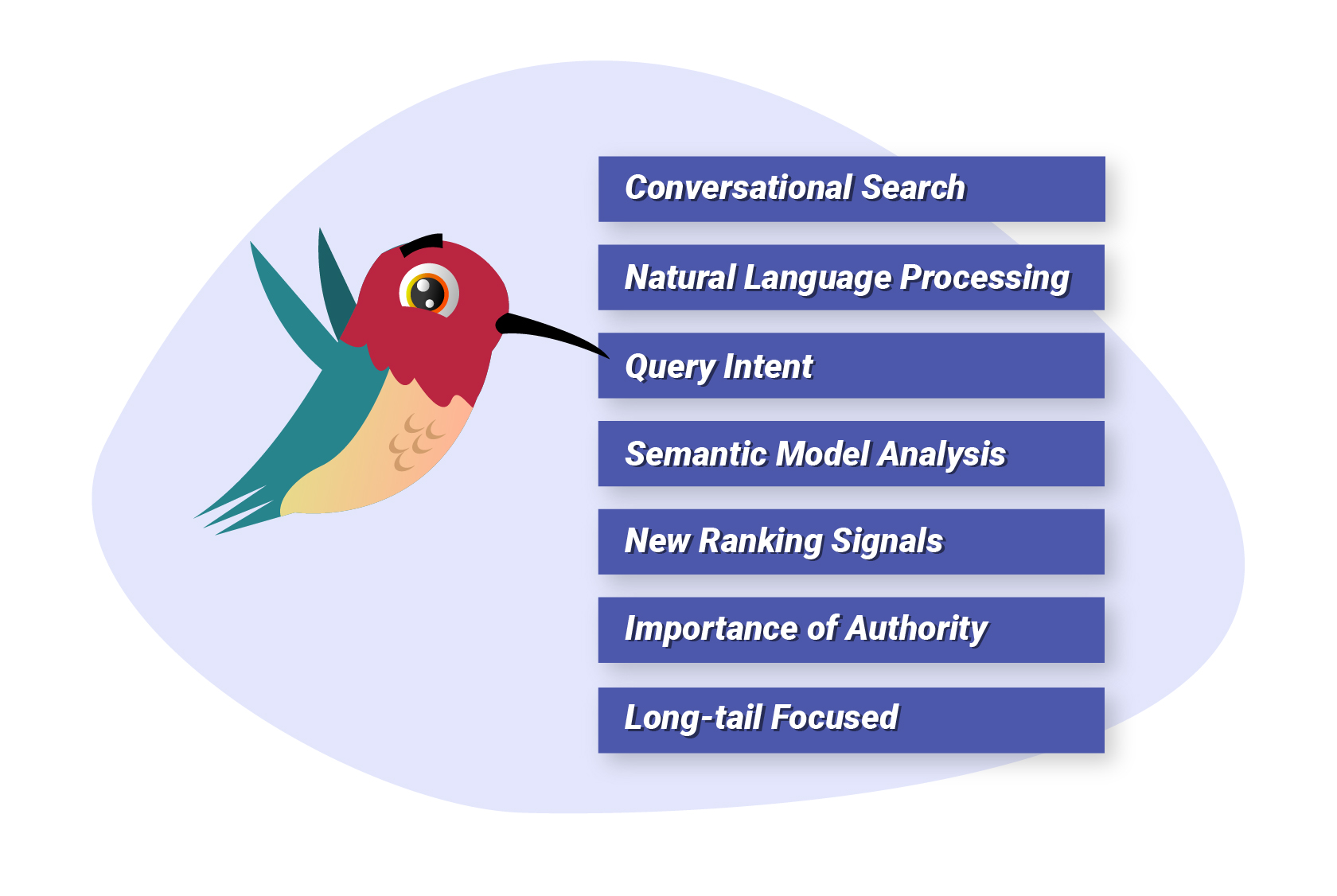 As mentioned in The Cleverness of Google, if we really think about Google Hummingbird update, we will realise that it affected a lot:

This algorithm’s name was derived from the speed and accuracy of the hummingbird. 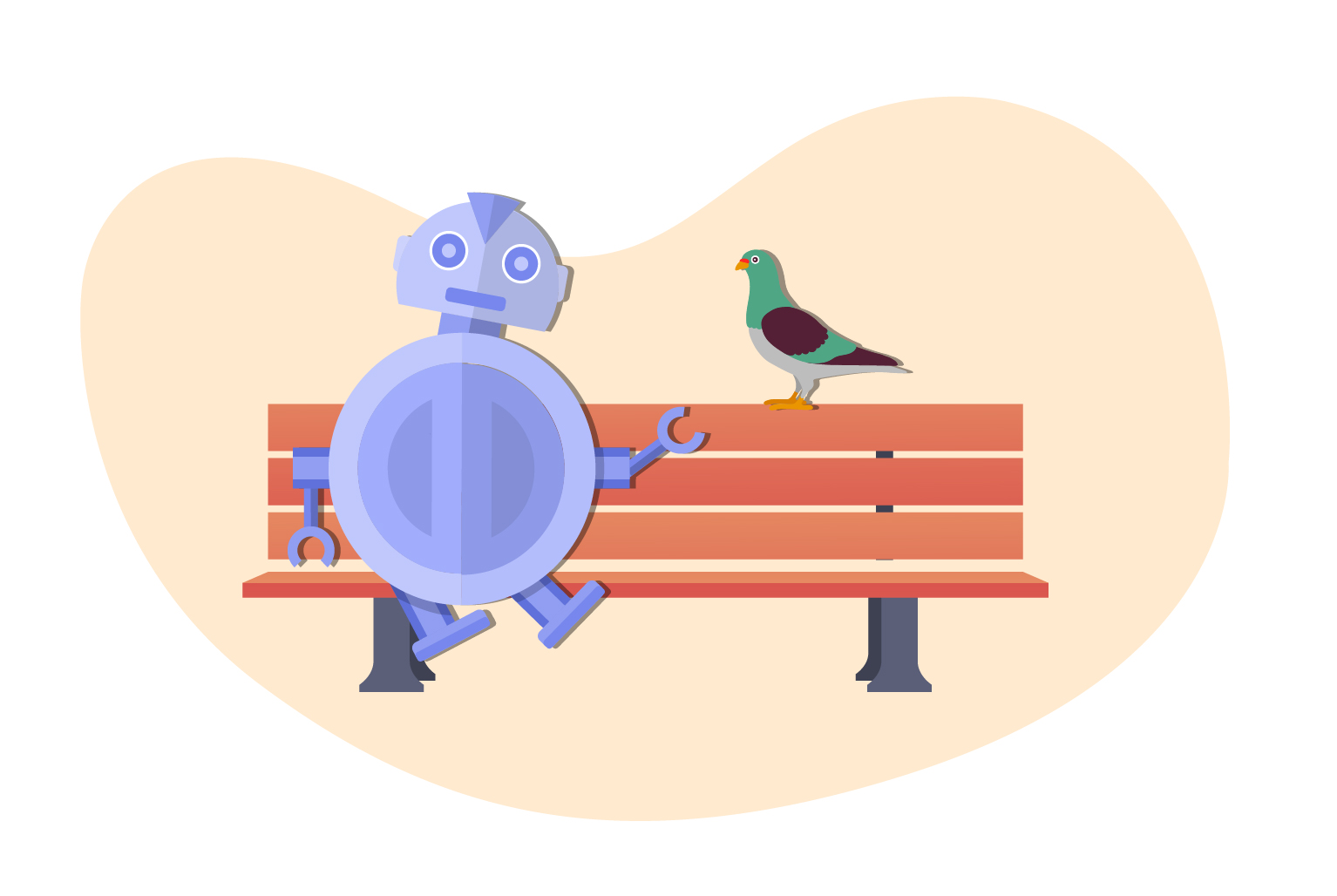 Google Pidgeon (what’s with the animals!?) update was launched on July 24, 2014, in the U.S., but according to some sources, it might have been released a year earlier.

Pidgeon was big for the local searches. In fact, it was so big that it changed how the SERPs presented the local results from a 7-Pack to (known even now) 3-Pack.

It wasn’t first that we heard of it, but Pidgeon put a lot more emphasis on NAP (Name-Address-Phone) signals. 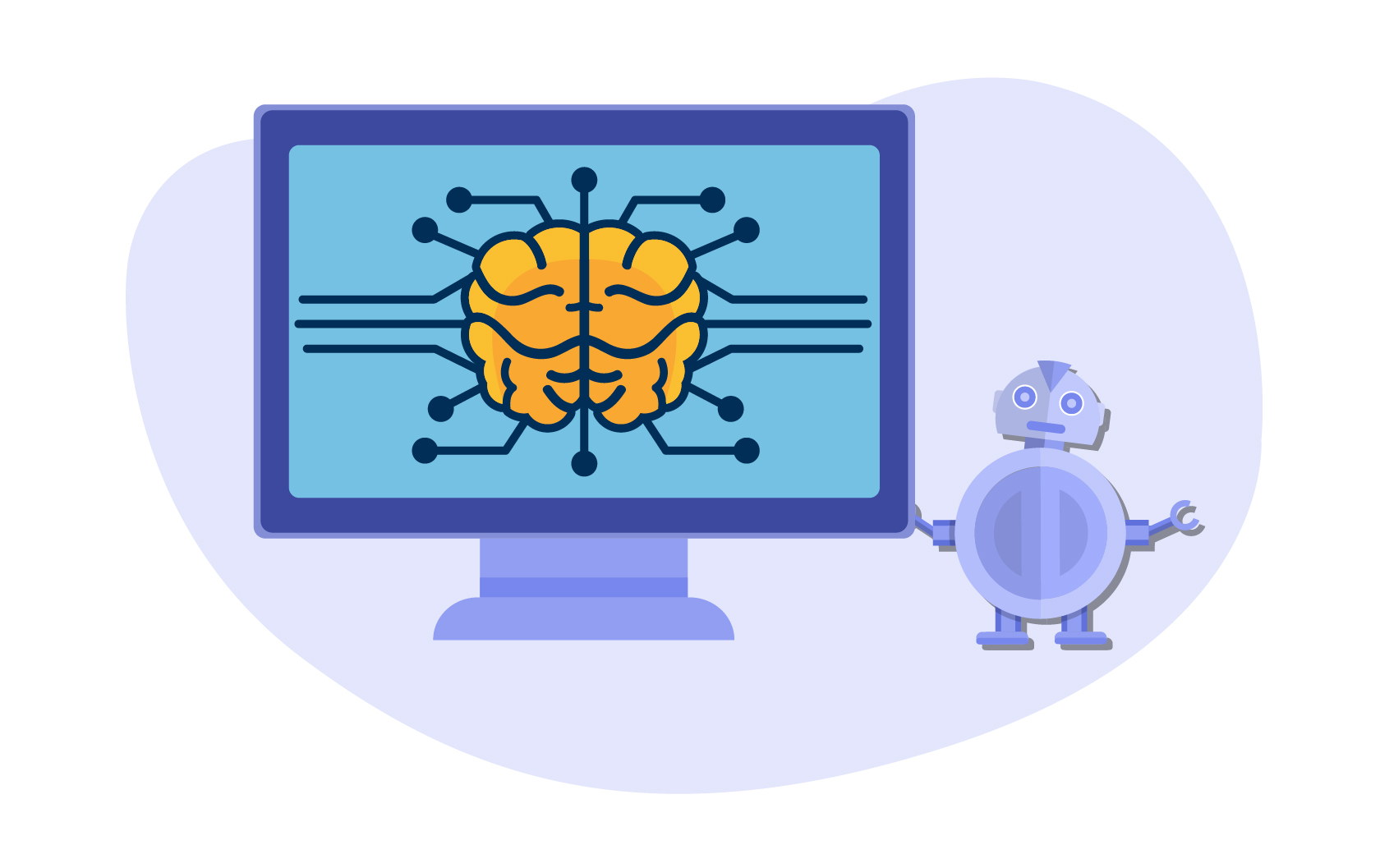 As already mentioned in The Cleverness of Google, RankBrain’s existence was first confirmed on October 26th, 2015.

This wasn’t just an algo change, it was a redesign of one of the elements in the core of Google Algorithm and, the first time when Google officially mentioned that their algorithm is using machine learning.

The main feature of RankBrain was to be able to return effective results for queries which the algorithm has never seen before (back then Google said it was around 15% of the queries each day). It did that through calculating proximity between the entities it deciphered from the user’s query in a multidimensional vector space. 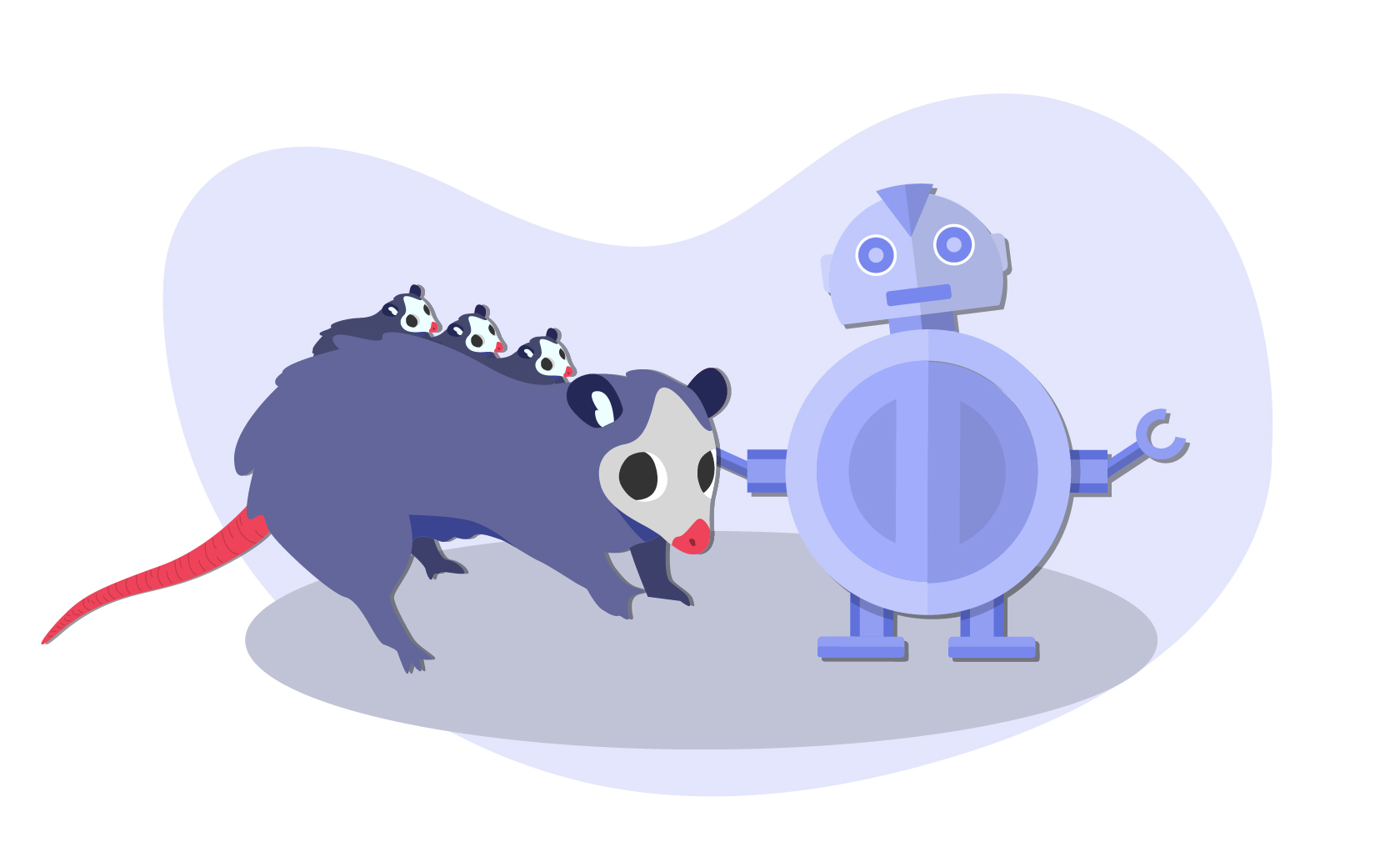 Possum was another local-search-focused algorithm update announced on September 1, 2016.

It mainly affected ranking in the Local 3-Pack of the search results and ranking on Google Maps. 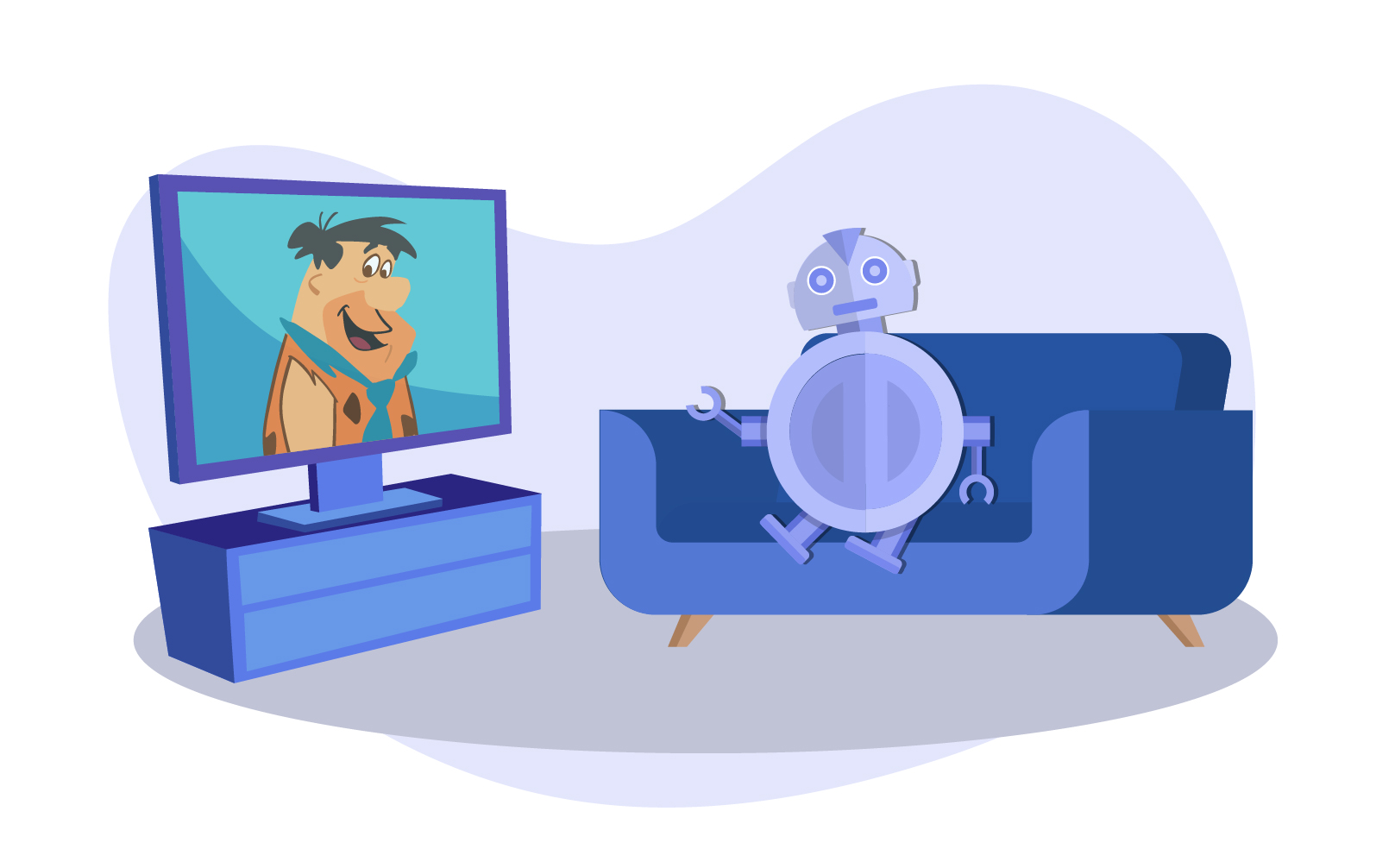 Google Fred update occurred in March 2017 and its name was given jokingly by Garry Illyes on Twitter.

By many, it was stated that Fred focused on the quality of content, aggressive ad monetisation and poor-quality links. Which all, in fact, are quality score factors, therefore we class it as a Core Quality Update – a concept which we are writing about in more detail below. 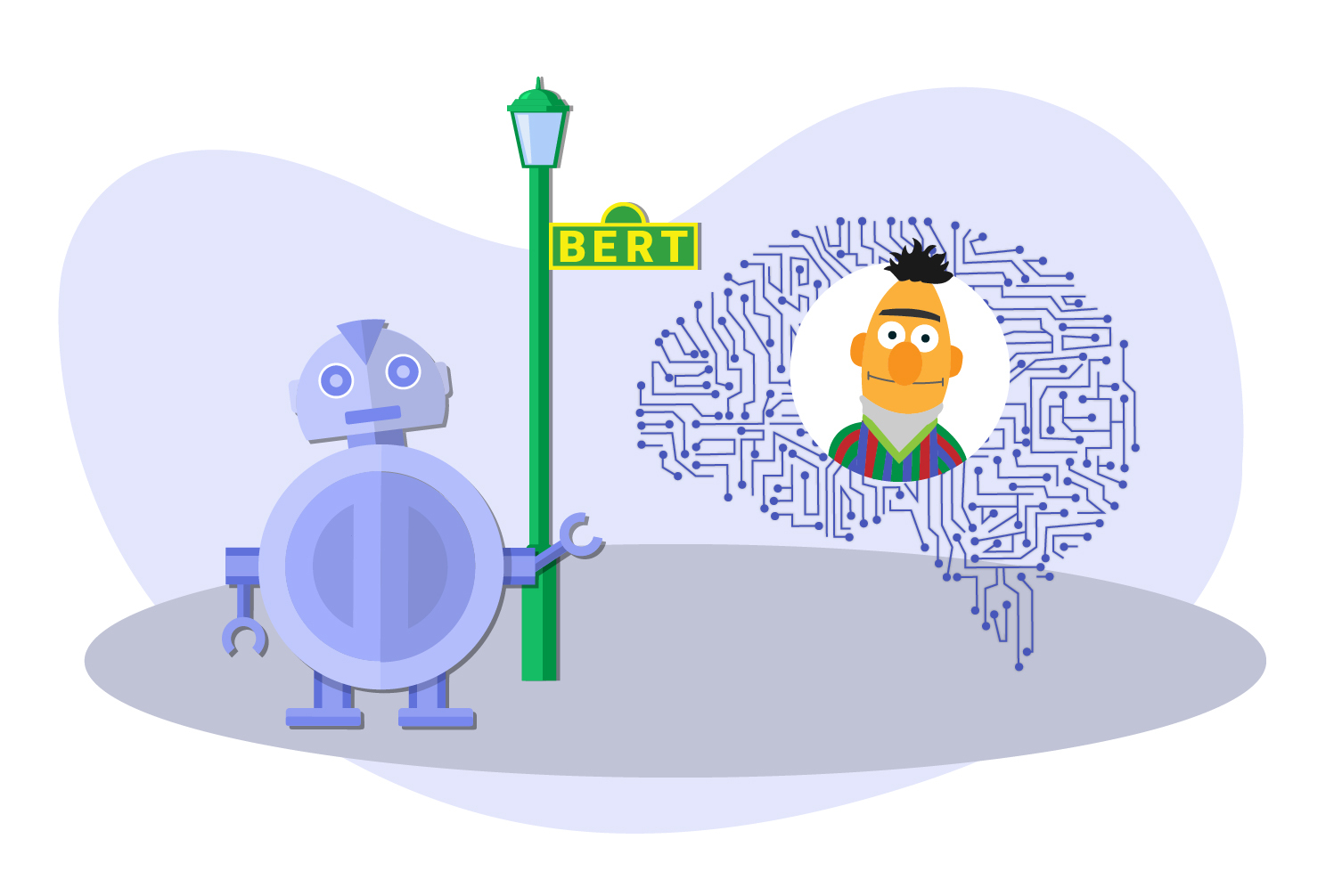 It was opened-sourced in 2018 and written about in more detail on the Google AI blog. In short, BERT can help computers understand the language a bit more as humans do.

Google said BERT helps better understand the nuances and context of words in searches and better match those queries with more relevant results. It is also used for featured snippets.

However, Google also said that there’s nothing, in particular, to optimize for BERT:

There’s nothing to optimize for with BERT, nor anything for anyone to be rethinking. The fundamentals of us seeking to reward great content remain unchanged.

If you think about it, it’s correct as BERT is only a technique to pre-train NLP models, so it’s responsible for analysing the content. Hence, what Danny Sullivan said, Google is rewarding great content, actually means with the help of BERT, they are now even better at understanding which content is just good and which is great.

As mentioned above, for the last few years, Google stopped naming and officially releasing algorithm changes that focus on a particular thing.

Several times per year, they release a broad, core algorithm update – here’s a Twitter post where Google speaks about one of them: 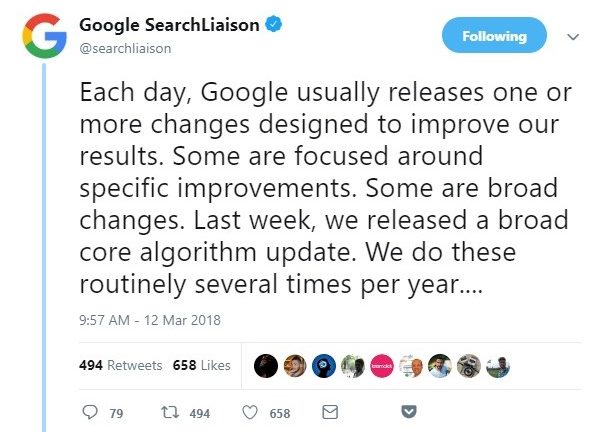 What’s really important, these updates are really broad and, as Google says themselves, seldom there is a particular “fix”: 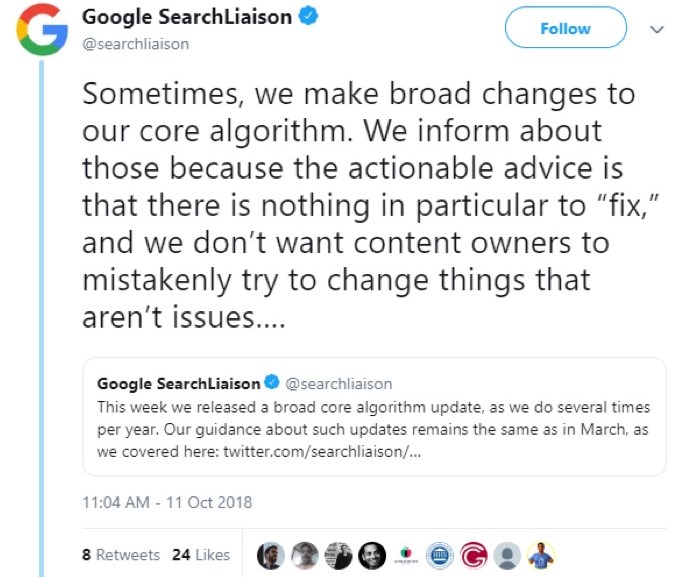 So far, there has been a number of these core updates, with the most recent roll-out (at the time of writing this) announced on May 4th.

As you can probably notice, Google announced an update in progress on the 4th of May and later on May 18th, it confirmed that the roll-out is finished. This is actually quite important to remember. Usually, if the algo change includes the core of the algorithm and is untargeted, but with a big impact (broad), it takes Google several weeks to fully roll-out.

Why this is the case? It’s simple!

Google works on the change first in their lab, later with their Quality Evaluators (Raters) and then with a sample of the traffic/queries. When they think the change is ready, they apply it live across the majority of or all of the data centres.

At this stage, however, it doesn’t mean that what they prepared is with no errors or mistakes. Once the update change is live, Googlers start to evaluate the feedback they receive through user metrics in SERPs. Based on this feedback, they adjust and adapt the change and this is why it usually takes a bit of time before it’s all settled and both users and Googlers are happy with what they see.

In all this turmoil of the roll-out, we don’t advise anyone to start making any changes to their website! Sometimes Google might adjust the change in favour of your website, so if you already made some changes, these might actually act against you. Wait patiently, analyse, but allow at least 2 weeks before approaching any implementations.

We often get asked if there are any differences between:

Our answer to this is: No.

In our opinion, Google (as well as SEOs) use these terms interchangeably.

In general, if there is a quality change that touches on the core of the algorithm, it will almost always be broad, meaning it’s not targeted at anything specific. In fact, broad algorithm change might be a change to a number of quality factors, sets of factors or even relations between individual factors or their sets. This makes things way more complicated.

If your traffic is negatively affected after a Google algorithm update, does it mean Google penalised you?

This is one of the opinions, we stay strong behind. Google algorithm update has nothing to do with a penalty. The difference is subtle but definite.

During a core algorithm update, the system that Google used to rank sites is changing. It means that it might affect you in a negative, positive or neutral way. It’s just a shift in what the search engine is doing internally, at the core level, so it might be a devaluation rather than a penalty